Karen Yuen, the 2010 University of Delaware Library/Delaware Art Museum Fellow in Pre-Raphaelite Studies, will speak on "The Music of Dante Gabriel Rossetti" on Tuesday, 20 April, at the Delaware Art Museum in Wilmington, DE. Her talk will focus on Dante Gabriel Rossetti’s changing attitude towards music as he matured. Described by his peers as a “music hater,” Rossetti was, at the same time, the most musically-inspired Pre-Raphaelite, producing countless paintings with color harmonies and musical instruments. Dr. Yuen’s research and presentation will explain the nature of Rossetti’s relationship with music, tracing the development of music in Rossetti’s works from the late 1840s to the 1870s. Prior to the lecture, the galleries devoted to the museum's Pre-Raphaelite collection (the largest outside the UK) will be open.

The lecture is free and open to the public.
No comments: 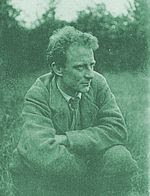 Participants may bring a lunch or eat in the Village Inn nearby. During lunchtime, publications and other merchandise from the Edward Thomas Fellowship and the Richard Jefferies Society will be offered for sale in the Village Hall, where there will probably also be a second-hand book stall.

Places at the study-day cost £15 (£5 for students and unemployed people), which include refreshments but not lunch. Bookings must be made before 1 May. A booking-form can be downloaded from the Fellowship's website at www.edward-thomas-fellowship.org.uk.

At the end of the afternoon, there will be an opportunity, using car-share, to visit St James's Church at Eastbury, Berkshire, which features an impressive engraved-glass window by Laurence Whistler, commemorating Edward and Helen Thomas, and where Helen is buried in the churchyard.

The next day, Sunday, 9 May, there will be a guided tour, "In the Footsteps of Richard Jefferies."
Andrew Rossabi, a former President of the Richard Jefferies Society, who has written introductions to several new imprints of Jefferies' works and is currently working on a new biography of this writer, will lead a guided walk (with readings) along the east side of Coate Water, over Cicely’s Bridge, to the Gamekeeper’s Cottage at Hodson, where walkers may look around the garden and view the old thatched cottage, as well as the bluebells in Hodson Woods. The return route takes in the west side of Coate Water, where a picnic lunch may be eaten (alternatively eat at the Sun Inn, Coate). In the afternoon, until 4.30 p.m., everyone will be welcome to explore Richard Jefferies's home, watch the film Jefferies Land, and share readings from Edward Thomas's and Jefferies's works.