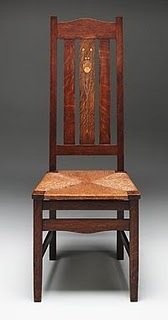 Gustav Stickley and the American Arts & Crafts Movement, organized by the Dallas Museum of Art and nationally premiering at the Newark Museum, is the first exhibition to focus on the career of one of the most influential figures to arise within the Arts and Crafts movement in the United States in the early 20th century. The nationally touring exhibition will examine the Gustav Stickley’s contributions to the American Arts and Crafts movement during his most productive and influential period, from 1900–1913. Ranging from furniture, metalware, lighting, textiles, and architectural plans, the majority of the objects on view are from private collections and has never been seen before by the public.

Gustav Stickley was a tastemaker, a publisher, and a manufacturer. The home furnishings, house designs and interior decoration that he promoted, produced and lived with embodied his progressive vision of design, which rejected the conspicuous consumption of the Victorian era and embraced the concept of an honest and beautiful simplicity in shaping the ideal American home. Inspired by the legacy of 19th-century English design reformers such as John Ruskin and William Morris, the Arts and Crafts movement sought to elevate the notion of “good design” and to promote the revival of craft as a potent means for personal and societal betterment. In the United States, Stickley forged a successful commercial enterprise in which his own firm’s products were linked to the precepts of the movement and promoted as key to the creation of the ideal American home and its associated way of life.

The Beauty of Life: Installation by Artist Hilary Pfeifer in Porland 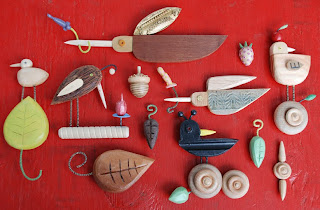 Hilary Pfeifer, a Portland, OR artist, is working on an The Beauty of Life, an installation inspired by the wallpaper and fabric patterns of Arts and Crafts designer William Morris, especially his famous textile titled Strawberry Thief. She will individually sculpt thousands of leaf, flower, fruit and bird forms, which will be connected into an interlocking three dimensional wallpaper pattern that will span over 100 square feet. The plant elements will be made of the same materials as my previous work: reclaimed wood from deconstructed homes, or ornate picture frames, rulers, decorative fruit, toys, and cooking utensils. No found object will be easily recognizable. The pieces in the center of this installation will be harmonious, but as your eye moves towards the edges and to the parts growing onto the adjacent wall and floor, the flora and fauna will become more wild and unusual in form and behavior. These elements will break from their patterned routines, craning towards the light coming from the open ceiling above. A bird might now turn its head to peer at the viewer, a provocative object held in its beak. A monochromatic carpet will fill much of the floor space of the gallery, and it will be apparent that some of the vines coming from the main wall have been covered by this surface, similar to the black ground cloth we use to smother unruly growth on an urban plot of land. These vines have traveled beneath the surface, however, sprouting up in far corners again. Like the edges of the wall installation, these plants are slightly changed when they re-emerge. This not only is a nod to the long running themes in her own artwork, but also a nod to Morris, whose outspoken political views made him a controversial figure in his time.

One of Morris's most famous quotes is: “Have nothing in your houses which you do not know to be useful or believe to be beautiful.” As an homage to this concept, the components of this installation are actually wall-mounted brooches and tie-tacks. Eight pieces that extend from the wall to the floor are neckpieces.

Pfeifer will be unveiling this project in the final six weeks of production on her blog. In addition, all the work from this installation is being pre-sold via an online campaign through Kickstarter) This will be Pfeifer's most intricate installation yet, so use Kickstarter funding to hire a team of professional jewelers and craftspeople to help me with the detailed construction work that this project requires. 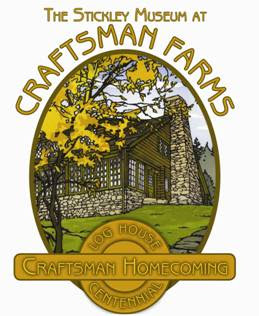 Shakespeare was wrong when he said that April is the cruelest month. It's October—at least for 2010. Too many activities of interest, scheduled too close for virtually anyone to attend them all.

First up, "Useful & Beautiful," the conference and related exhibitions and events in Delaware, on 7–9 October. For details click here.

The next weekend sees not only a symposium and benefit gala at Craftsman Farms, the New Jersey museum dedicated to Gustave Stickley, but a Stickley symposium at the Newark Museum. Also on 15–16 October—the annual conference of the American Printing History Association, with its traditional Arts and Crafts connections, in Washington, DC.
The cornerstone in a year of centennial events honoring Stickley’s groundbreaking achievement and celebrating his family’s joyous homecoming. the Craftsman Farms event begins on Friday, 15 October with a pre-symposium lecture at Craftsman Farms. Leslie M. Freudenheim, author of Building with Nature: Inspiration for the Arts and Crafts Home, will speak on  "Gustav Stickley, Joseph Worcester and the San Francisco Swedenborgian Church." Freudenheim will explore this National Historic Landmark church, its minister Joseph Worcester, and their connection to Gustav Stickley, who twice featured this church in The Craftsman magazine. A book signing and reception will follow the lecture.

On Saturday, 16 October, the celebratory weekend continues in collaboration with the Newark Museum’s premiere of the nationally touring exhibition Gustav Stickley and the American Arts & Crafts Movement.  Join us for a symposium entitled "Honest & Beautiful: The Arts & Crafts Home in America" presented at the Newark Museum and cosponsored by the Stickley Museum. Click here for registration and further information about this exciting program. Finally, on Saturday night, beginning at 6:00 p.m. the Craftsman Homecoming Gala takes place at the Mountain Lakes Club in Mountain Lakes, NJ. Join John H. Bryan, Honorary Chair and event co-chairs Robert C. Burchell and Ann Reynolds for an evening of cocktails, dinner, and dancing to the music of the Andy Sherwood Trio. The evening will include the presentation of the Als Ik Kan Award to John Bryan. The gala’s auctioneer is David Rago, well known for his frequent appearances on Antiques Roadshow, and best known to Stickley Museum members as the recipient of the Foundation’s Als Ik Kan Award in 2000.