Each year during the annual Modern Language Association Convention, the William Morris Society sponsors one or two sessions of papers and also takes a field trip to a local arts and crafts site. This year I organized a special session on Pre-Raphaelites in the Pierpont Morgan Library, so we visited the Morgan for a private exhibition on January 5, 2018. It was held in the decidedly swanky North Parlor and featured objects mentioned in the papers given by Meghan Freeman, Heather Bozant-Witcher, and myself. 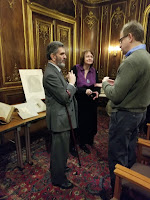 This photograph shows three long-time members of the Morris Society in attendance: Mark Samuels Lasner, Florence Boos, and Frank Sharp. Behind Mr. Samuels Lasner is an early sketch (1860) made by Dante Gabriel Rossetti of William Morris’s wife Jane. The sketch had been owned by musical theater composer Jerome Kern and was acquired by the Morgan in 1961. It is virtually unknown, since it was not mentioned in the 1971 complete catalogue of Rossetti’s works compiled by Virginia Surtees (who died just this past year at the age of 100).

The exhibition was put on display for us by Sheelagh Bevan of the Department of Printed Books. It also featured caricatures by Ford Madox Brown and Edward Burne-Jones; autograph manuscripts of Morris’s News from Nowhere and House of the Wolfings; a pencil sketch and reworked platinotypes of Burne-Jones’ illustrations for the Kelmscott Chaucer; and two copies of the Kelmscott Chaucer itself, one on paper and one on vellum.

In a posting to this blog from July 14, 2017, curator Rowan Bain announced an exhibition of the artworks of William Morris’s daughter May, which was held at the William Morris Gallery in Walthamstow, East London from October 2017 through January 2018. Our own exhibition at the Morgan featured two items by May, one a sketchbook with two virtually unknown watercolors of Kelmscott Manor, and the other a book cover which she embroidered. The catalogue of the Walthamstow exhibition mentioned a transfer design for this cover at the Ashmolean Museum in Oxford but was unaware of the embroidered cover itself owned by the Morgan.

The cover was made in 1891 for the 1890 edition of Charles Kingsley’s The Water Babies and was designed not by May but by the decorative artist Selwyn Image (1849-1930). May’s embroidery features gold, blue and dark pink threads rendering an array of Japanese-looking coiled fish and stylized water symbols. May probably added the dark pink and green tulips on the spine of the book, which were not part of the transfer design. The cover was bequeathed to the Morgan in 1994 by Julia P. Wightman, herself a bookbinder and collector.

The exhibition provided a close look at these fine objects and also served as a cordial reception before most of the attendants went on to our annual dinner downtown.

The Novel in Marbled Covers

The Minute Book of Morris, Marshall, Faulkner, & Co., held at the Huntington Library in California,
is a palm-sized volume with handsome marbled covers. Ford Madox Brown, the Pre-Raphaelite painter who served as the 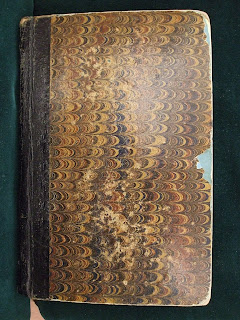 Firm’s unofficial secretary and chair, presumably picked it up at a stationer’s shop sometime near the end of 1862, shortly before writing on its flyleaf, “Morris, Marshall, Faulkner & Co. Minute book commencing Dec 10 1862.” On the page opposite he wrote the Firm’s address in Bloomsbury: “8 Red Lion Sq.” Brown bought a book with blank pages; if he had been thinking ahead, he might have purchased something larger, more suitable for accounting. Within weeks, when he wrote up a lengthy balance sheet, he had to spread the figures over several of the small, unlined pages. Yet the volume’s impractical elegance seems appropriate. Looking through the entire Minute Book, as I did on a recent research trip to the Huntington, is less like examining an account book than like reading a particularly engrossing novel—one that follows a set of engaging characters over a twelve-year relationship that begins in playful high spirits and ends in acrimony. 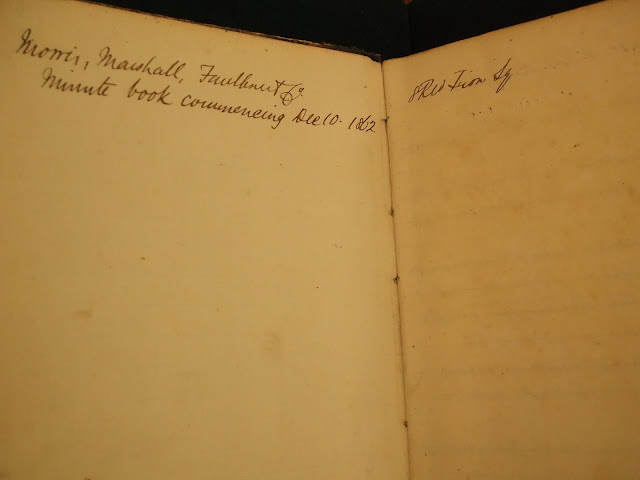 The Firm was founded in April 1861 by the three named partners, along with Brown, Edward Burne-Jones, Dante Gabriel Rossetti, and Philip Webb. Rossetti claimed that it was founded as a lark, that they “had no idea whatever of commercial success,” but his account has been undermined by Charles Harvey and Jon Press in their thoroughly researched revisionist account of Morris’s business career. Still, the Minute Book suggests that the partners approached their work with a combination of commercial ambition and high bonhomie. During the early years, they were committed to regular weekly meetings, no matter the season, so that when the meeting day fell on Christmas Eve, as it did soon after Brown began the Minute Book in December 1862, the event was not cancelled. Only Faulkner and Burne-Jones showed up, however, and Burne-Jones filled the role of secretary and chair. His notes are brief:

It was proposed to admit strangers which proposition divided the meeting and it was found that there was one vote for and one against it. The chairman settled the matter by giving his casting vote in favour of strangers being admitted. The little stranger Val [evidently a boy from the neighborhood] was accordingly brought in. (N.B. he was grinning as usual) 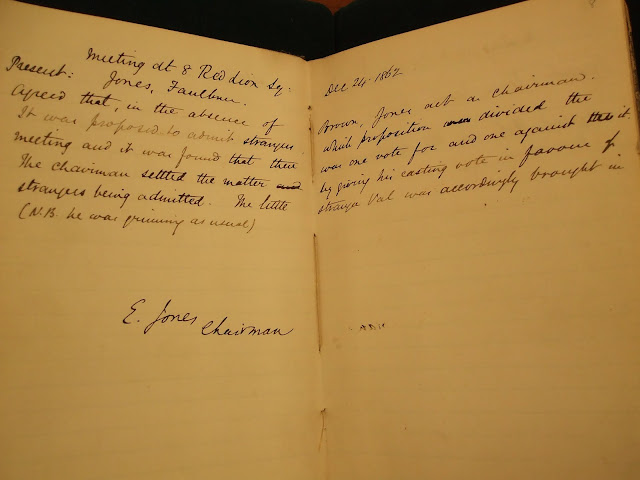 Burne-Jones’s playfulness is evident in this entry, which confirms Faulkner’s account of meetings in a letter written earlier the same year. The meetings, he wrote:

have rather the character of a meeting of the ‘Jolly Masons’ or the jolly something elses than of a meeting to discuss business. Beginning at 8 or 9 p.m. they open with the relation of anecdotes . . . this store being exhausted, Topsy and Brown will perhaps discuss the relative merits of the art of the thirteenth and fifteenth century, and then perhaps after a few more anecdotes business matters will come up about 10 or 11 o’clock and be furiously discussed till 12, 1, or 2.

Meetings may have been jolly, but the Minute Book reveals that most of the partners took them seriously and expected regular attendance. In February, 1863 they adopted a motion: “Each member to receive the sum of 10/- [shillings] for his attendance at every ordinary or special meeting of the firm.” The motion must have been intended as a carrot to entice the frequently absent Rossetti to attend. If so, it backfired; the next week Rossetti showed up, but the partners voted to amend the motion: “Agreed that the payment of 10/- to each member for attendance at a meeting be allowed only to those members who arrive before 10 P.M.” Rossetti stopped attending.

During the remainder of 1863, meetings continued irregularly, but badinage evidently trumped business at most of them, since the pages are blank aside from the record of those in attendance. In December, however, Brown recorded that they had agreed to sound out an artisan “as to whether he will be willing to work for the firm if the workshop be removed from London to Morris’ house at Upton.” Morris’s Upton residence was the famous Red House, which Morris and Burne-Jones were dreaming of turning into what they called a “Palace of Art.” They would expand the house so that the Burne-Jones and Morris families could live and work side-by-side, integrating their affectional and professional lives. A contemporary reader, however, is aware of the poignancy of this entry. Within a year, both families would be struck with serious illnesses, the Burne-Jones’s newborn son would die, and Morris would, with great pain, abandon both his longed-for Palace of Art and Red House itself.

Once Faulkner, who had been serving as business manager, left the Firm to return to Oxford as a fellow in mathematics in early 1864, regular partners’ meetings ceased. The few meetings held during the remainder of the 1860s reveal that Morris was increasingly consolidating his power. He had reason to do so. A balance sheet from February, 1863 shows that a substantial portion of the firm’s assets consisted of loans from Morris (£400) and his mother (£200). Moreover, Morris had completed far more work for the Firm than any other member; his account for work completed totaled over £150, while the nearest partner, Webb, had earned under £100, and Rossetti’s commissions totaled under £7.

At the few partners’ meetings held after 1864, the group increasingly ceded power and profits to Morris, agreeing to pay off his £400 loan, increasing his salary, and giving him 10 per cent of net annual profits.

Finally, in late 1874, with his income from investments declining and his energy increasingly devoted to the Firm’s success, Morris determined to dissolve the partnership. After a silence of nearly four years, the Minute Book records a somber meeting attended by all the partners except Brown and Rossetti: “Resolved unanimously: that it is desirable that the firm be dissolved.” The minutes go on to record that “Mr. Morris laid before the meeting two papers,” which revealed that Marshall, who by this point had become a desperate alcoholic, had gone behind the others’ backs to try to reconstitute the firm as “Morris, Marshall, & Co” and to move it to his own premises. The minutes note, with considerable restraint, that “this meeting disapproves of Mr. P. P. Marshall’s proceedings in this matter.”

Less than two weeks later, on November 4, Morris and three of the six other partners gathered for their final meeting. They were joined by two solicitors, one representing Brown and the other Morris. Brown insisted, via his lawyer, on a substantial payout in return for the “goodwill” he had invested. Morris responded, with mordant humor, that “in the event of the dissolution of the firm there would be no good will.”

So ends the Minute Book of Morris, Marshall, Faulkner & Co. What had begun in fellowship and boisterous good spirits concluded with solicitors and irony.

--Michael Robertson, The College of New Jersey
No comments: