The Whitworth Art Gallery at the University of Manchester will open a new display on 16 August 2008 entitled "Art and Labour’s Cause is One": Walter Crane and Manchester, 1880-1915. A close associate of William Morris, Crane was one of the most important, versatile, and radical artists of the nineteenth century—illustrator, painter, designer of decorative objects, wrier, and socialist. This exhibition explores the central role played by Manchester in Crane’s fusion of art, labor, and politics.
On 5 and 6 December the Whitworth Art Gallery hosts a conference, “Envisioning Utopia: British Art and Socialist Politics, 1870-1900,” to examine the dynamic between the urban and the pastoral in utopian visions of a socialist future and explore the role of visual art in formulating and articulating these political ideals. Keynote address Friday at 5.30 p. m. by Tim Barringer (Yale University). Speakers include Matthew Beaumont (Univeristy College London), Jo Briggs (Yale Center for British Art), Michael Hatt (Warwick University), Ruth Livesey (Royal Holloway College, University of London), Sarah Turner (Courtauld Institute), and Anna Vaninskaya (King’s College, Cambridge University).

For more information, email Morna O'Neil,waltercranearchive@gmail.com. This event is supported by the Paul Mellon Centre for Studies in British Art.

It's not every day that one opens a letter from the Internal Revenue Service which begins: "We are pleased . . .." After much work and the help of two lawyers (one of them our member, David Lowden, who helped pro bono. Thanks, David!) the William Morris Society in the United States has been granted tax-exempt status under section 501 (c) 3 of the Internal Revenue Code. This means that gifts (financial and in-kind) to the society and dues may be deducted from income tax up the amount allowed by law. It also allows the society to escape paying sales tax on the purchase of goods and services—such a printing—and, not to put too fine a point on it, gives us a certain pride and prestige. The change in status will reqiore additional accounting records, also a yearly filing with the IRS (the first one goes out next week), but the benefits will surely outweigh the chores. We of course will welcome any and all contributions, especially those directed towards the society's fellowship program.
1 comment: 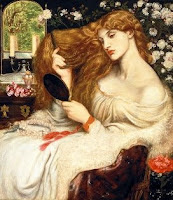 WILLIAM MORRIS SOCIETY EVENT
Join us at the Delaware Art Museum for an afternoon of art and fellowship. Our visit begins at noon with a special group tour of the reinstallation of the largest Pre-Raphaelite collection outside of England. On view are more than 100 paintings, works on paper, books, photographs, and decorative objects. Lunch follows at 1 p. m. in the museum's cafe. Then stay for a lecture (2 p. m.), "Flora Symbolica: Floral Symbolism in the Pre-Raphaelites" by Debra N. Mancoff, noted art historian and the author of Flora Symbolica.
Museum admission and the $15 lecture fee are waived for members of the William Morris Society (you are responsible for paying for lunch).