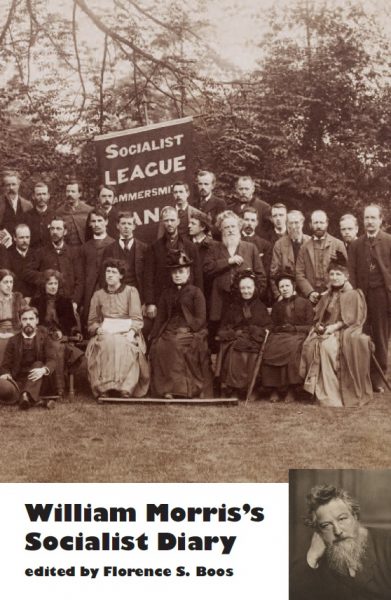 I was pleased when a few years back Ross Bradshaw, the proprietor of Five Leaves Press, asked to reissue my edition of Morris’s Socialist Diary. The pages of this now quite rare 1981 Journeyman Press edition had yellowed, and I further wanted to improve its biographical notes based on the scholarship of the past three decades. In particular, I wished to emphasize the role women had played in the socialist movement, and also offer any possible new information on the lesser-known socialist and anarchist pioneers of the movement, often impressive persons in their own right.

In preparing the first edition, it had taken me about a year to document three months of Morris’s 1887 socialist activities – a testimony to Morris’s astounding energy and breadth of interests. The need for such density also reflects the dramatic nature of the Diary’s contents, as Morris struggled to calm the differing factions of the Socialist League and deliver multiple lectures in London, northern England and Scotland. As the editor of Morris’s journalism, Nicholas Salmon, noted in 1996:

Between 1883 and 1890 he was probably the most active propagandist in the whole country. In a seven year period he addressed over 1,000 meetings and was heard in person by as many as 250,000 people. His articles and editorials reached thousands more. As [E. P.] Thompson has written, “every group of Socialists included some who had been converted by his words.” . . . His lecture campaign of 1883 to 1890 remains one of the most impressive ever undertaken by a British politician. (Political Writings, xlvi-vii)

Returning to the Diary enabled me to think through once again how Morris’s political concerns during this period—Irish Home Rule, the Paris Commune, police violence, the threat of upheaval and war—affected his views of revolution and a possible socialist future, as well as how the opinions and personalities of his fellow activists may have influenced his views.

Since my academic field is literature, I was grateful when a British labor historian, Stephen Williams, volunteered to help gather information on some of the Diary’s more obscure figures for the biographical notes. Stephen was adept at using databases to trace down the earlier occupations, residences, and at times inflammatory statements of our subjects—anarchists such as James Tochatti and Henry Charles, socialists such as Henry Barker and Alexander Donald, and the interesting cadre of émigrés which included Gustave Brocher, Victor Dave, and Andreas Scheu. Stephen’s knowledge of labor history also enabled him to locate photographs of members of the Social Democratic Federation and other labor and socialist activists such as H. H. Champion and Jack Williams, helping to provide a more rounded portrait of the socialist milieu of the time.

From his youth Morris had been attracted to other languages and cultures, and the Socialist League practiced an active internationalism through welcoming many foreign members. Stephen’s researches also uncovered several American connections, as unemployed or underemployed socialists emigrated to the United States. Henry Charles, for example, became an anarchist publisher and promoter of alternative health remedies in New York, and James Allman, sentenced to imprisonment during the period of the Diary, was most likely the James Allman who sixteen years later published in Chicago a volume consisting chiefly of a socialist oration purported to have been delivered in London’s East End. More important, such researches reveal that a high proportion of Morris’s early fellow socialists were lifelong committed activists, who had participated in labor and socialist movements before joining the Socialist League and would continue their activism after its demise.

To mark the official March 2018 appearance of the Diary, I was invited to give three presentations in Britain, with book signings at each. These invitations surprised me, since few of my previous books and editions had elicited more than academic interest. I attributed the change entirely to Jeremy Corbyn and the renewed interest in socialist origins inspired by the recent resurgence of the British left. As a consequence, all three audiences were composed of persons who had thought long about the obstacles attendant on efforts to transform a capitalist society, and they listened with recognition and nodded frequently as I spoke.
The first talk was scheduled in Nottingham March 18th as part of the Five Leaves Bookshop lecture series. Unfortunately what in Iowa would have been a minor snowfall had closed down much of the Nottingham bus system, and when I arrived Ross Bradshaw said he feared that few of the 35

persons who had signed up to attend would be able to make it. As it turned out most of them did, so that the room was quite crowded with a friendly audience. Two who attended had brought copies of their own publications for me, and I was especially charmed by Ross Longhurst’s gift of a “William Morris Green Communist” button
This was a sophisticated but occasionally skeptical audience; one woman wanted to know why Morris should receive more attention than Blatchford, for example, and I was stumped when historian David Stewart asked if Morris had visited Nottingham. (It seems he had delivered five lectures on three visits, in 1881, 1887 and 1888.) From my perspective an exciting result of my talk was that Ross Bradshaw later decided to reprint Morris’s Nottingham lectures with an introduction describing what is known of these visits, and three or four other attendees offered e-mail recollections of the venues where Morris had spoken.

On the Wednesday following, March 21st, I took the Metropolitan Line to Kelmscott House, long my favorite place in London, and where my husband, our five-year old son, and I had lived during the summer of 1980 before the closure of its upper floors to the Morris Society. (Something of that experience must have imprinted itself on me, for I have since visited the house some dozens of times, and as this blog indicates, I remain an admirer of Morris’s works.)

Martin Stott, the president of the UK William Morris Society, had arranged to interview me, and this format worked well, the more so since some of his questions were a bit unexpected—how did this Diary relate to Morris’s Icelandic Diaries, for example? What does the Diary tell us that we couldn’t have learned from his letters or other writings? I offered the conclusions I had arrived at while expanding the biographical notes: the considerable extent to which Morris was influenced by the many anarcho-communists in the Socialist League, especially in the Hammersmith Branch; the ways in which many early socialists had been affected by the model of the Paris Commune; and the degree to which most of them remained hopeful of radical change within their lifetimes or at least a few generations.

Needless to say this Morris Society audience was well familiar with Morris’ ideas, and their questions centered on such topics as his Commonweal articles and relationship with Marxism. I spent the reception signing copies of the Diary, whose sales were doubtless helped by the generous discount offered by Ross Bradshaw to Morris Society members, and afterwards several of us convened to the Dove Tavern to exchange personal news and thoughts about the political situations of our respective countries.

My final event was scheduled for the next evening. Though I had visited many times, I had never before delivered a talk at the William Morris Gallery, and I felt honored to have been invited to present the annual Morris birthday lecture, sponsored by the Friends of the William Morris Gallery. The Gallery, not surprisingly, is known for its artistic exhibits, but this topic drew a crowd with serious political interests for whom Morris was an important inspiration.
The question I remember most was that posed by David Mabb, “Would Morris have approved of Momentum?” For this one I took a leap—all I knew of this left-wing faction of the Labour Party came from reading the sketchy online Guardian—and when I said “Yes!” the audience laughed sympathetically. Who knows what Morris really would have thought? As I sought out more information later, I do believe he would have given his blessing to this effort, but he might still have said, as he did so often in his time, [to paraphrase] “Electoral reform can lead towards social revolution, but in itself it is not enough!”

I believe that the Socialists will certainly send members to Parliament when they are strong enough to do so: in itself I see no harm in that, so long as [they are not] prepared by passing palliative measures to keep ‘Society’ alive. But I fear that many of them will be drawn into that error by the corrupting influence of a body professedly hostile to Socialism: and therefore … I think it will be necessary always to keep alive a body of Socialists of principle who will refuse responsibility for the actions of the parliamentary portion of the party. (Letter, 23 May 1887) 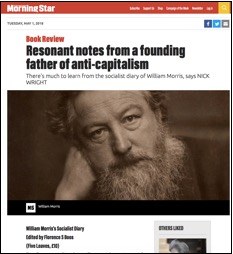 This was another entirely sympathetic audience, and I signed books until the Gallery closed and friends drove me to the Walthamstow tube station. As fate had mandated, I needed to be back in British Columbia by the next evening, and so by 3 a.m. I began the journey to the airport for my 22-hour journey home. This was not entirely the end, however, for on May Day 2018 the British Morning Star published a long discussion of Morris’s contributions to socialism as a review of the Socialist Diary.

In all, I couldn’t have been more gratified that Morris’s ideas are still seen as relevant for their own sake, apart from any antiquarian or celebrity interest. None of my audiences wanted to take him to task for his distaste for parliamentarianism or his skepticism about the ultimate power of trade unions—once heated debates on strategy now relegated to the past.  Instead they viewed Morris within the context of their ongoing aspirations, as the prescient champion of a broad and enlightened vision of socialism.

Finally, I would like to remark that one small notebook of Morris’s political observations has given rise to a 182 page volume—and yet the Diary constitutes only a tiny fraction of Morris’s political writings during his thirteen years of socialist activity from 1883-96. Apart from partial efforts by Nicholas Salmon, Norman Kelvin, and others, Morris’s socialist journalism has never been fully edited as a whole; his essays and pithy, sarcastic short notes in Commonweal, for example, would benefit from annotation, and a few of his later socialist essays remain unpublished. I can also imagine a useful handbook of branches of the Socialist League and their members, or more broadly, an illustrated biographical guide to anarcho-communists and socialists of the 1880s—efforts which would help balance the tendency to see these movements as populated chiefly by certain otherwise well-known figures such as Bernard Shaw, Emery Walter, or Walter Crane. In recent decades scholars have given less attention to British socialism, and I hope that the recent change in political milieu will prompt younger interpreters to mine Morris’s political writings and their immediate context to uncover their continued relevance.