A symposium, open to the public, organized by the Department of Art History,
the City University of New York, Graduate Center.

In American academia, British Victorian art has been perceived pejoratively as regressive relative to French art's trajectory toward modernism. In sharp contrast, English departments in the United States have encouraged the study of British Victorian literature since it was first set down on paper, with postmodern scholars championing Victorian literature's handling of issues from colonialism and racism to aspects of gender and sexual identities. The Victorians were the dominant imperial power and leaders of the industrial world at the dawn of the twentieth century, but the study of Victorian visual art and culture is still largely looked upon unfavorably in the United States, with American museums only rarely mounting exhibitions about Victorian art. Recently, this trend has been slowly changing. More students are pursuing dissertation topics in the areas of British Victorian painting, sculpture, architecture, and photography. Furthermore, conferences such as the 2008 annual meeting of NAVSA acknowledge the rising importance of Victorian art, including interdisciplinary panel sessions on topics such as sculpture and global contexts, queer visualities, and Darwinism and the arts. "Why Victorian Art?" will bring together scholars to address two critical issues: why the study of Victorian art has been overlooked in the U.S., and how a closer examination of Victorian art can provide new or alternative perspectives in the study of nineteenth-century art and culture.
For more information download the symposium announcement.
1 comment: 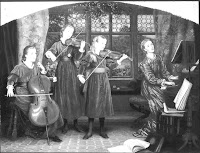 Although he was a friend and colleague to many famous artists, authors, and activists, the lawyer and positivist Vernon Lushington (1832–1912) remains virtually unknown today. In “Vernon Lushington: Pre-Raphaelite, Friend of William Morris, and Father of ‘Mrs. Dalloway,’” historian David Taylor will draw upon previously unavailable materials from the Lushington archive to shed light on the interesting and influential figure who arranged the first meeting between Edward Burne-Jones and Dante Gabriel Rossetti and who visited with William and Jane Morris at Kelmscott Manor. Taylor will also discuss the connection between the Lushingtons and the Stephen family. After the death of Mrs. Lushington, Vernon's three daughters (above) were taken under the wing of Julia Stephen, wife of Leslie Stephen and mother of Virginia Woolf. Vernon Lushington’s eldest daughter, Kitty, became the model for the title character of Woolf’s novel Mrs. Dalloway (1925). The Lushingtons also spent summers with the Stephen family at Talland House in Cornwall, which provided the setting for the Ramseys’ summer home in Woolf’s To the Lighthouse (1927). Letters in the archive offer insight into Woolf’s fiction.David Taylor is a historian, writer, and lecturer living in Cobham, Surrey.
A Fellow of the Society of Antiquaries, Taylor has published several works on the history of Cobham and presented lectures to the Virginia Woolf Society, the Pre-Raphaelite Society, and the William Morris Society. Vernon Lushington is the subject of Taylor’s doctoral research.

Sponsored by the William Morris Society in the United States, the American Friends of Arts and Crafts in Chipping Campden, the Grolier Club, the Stickley Museum at Craftsman Farms, and the Victorian Society in America.
Tickets: $12 reduced rate for members of the Society and the other sponsoring organizations; $18 for others.
For more details and to purchase a ticket, click here.
Contact Mark Samuels Lasner, (302) 83-3250.
No comments: